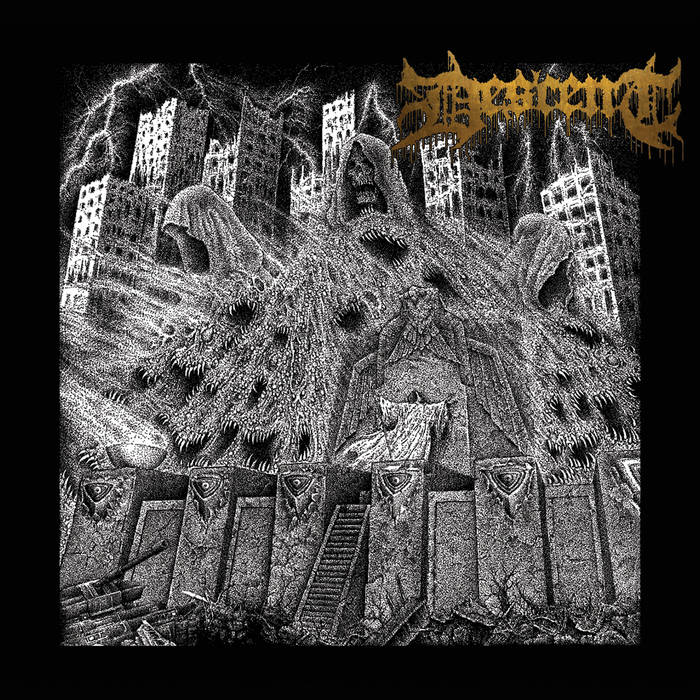 jerm Somewhere between entombed and rotten sound lies descent. This will no doubt make my end of year list

Katimavik86 Brutal stuff. Had it in regular rotation for a while - sure to be on my 2018 list somewhere. Favorite track: Pedestal of Scum.

Herman Sick, vicious, and brutal. This album will chew you up and spit you out. Favorite track: Skinwalker.

" This track [Skinwalker} is absolutely explosive. While Descent‘s music pulls from across a spectrum that ranges from death metal to grind to hardcore punk, and will likely appeal to fans of Dismember, Black Breath, and Nails, this particular track is simply an overpowering assault on the senses, one that kicks the adrenaline into overdrive from the first second.
It has that mauling, chainsawing guitar tone that brings to mind old Swedish death metal; a big bone-quaking bass pulse; a mix of blindingly savage, range-spanning vocals; some truly attention-grabbing drumwork; and the kind of rampant, full-throttle energy that could drive the powergrid of a large metropolis."
- No Clean Singing
www.nocleansinging.com/2018/07/13/an-ncs-premiere-descent-skinwalker/

"The sometimes downright frantic sound that they deliver on Towers of Grandiosity is definitely enough to impress, as they lean into lethal doses of grind on “Skinwalker” and “Hindsight,” and the raw energy is palpable. The often blasting beats (and d-beats) are an adrenaline rush of the highest order – just listen to “Fountains of Sand” and not get sucked into the abyss."
- Dead Rhetoric
deadrhetoric.com/reviews/descent-towers-of-grandiosity-redefining-darkness-records/

"Towers of Grandiosity does not like you, does not like your grandmother, and does not like the sweet card she sent you for your birthday. The most notable, immediate ingredient of the record is old school Swedeath of the Dismember style, both in terms of riffs and that chewy guitar tone, with the occasional mid-paced minimalist charge more in line with Bolt Thrower. Also prevalent, however, is that punk nastiness, mostly delivered through a heap of d-beat riffs and rhythms. Some of the album’s best moments are when it blurs the lines between the two sounds, such as how “Skinwalker” rapidly switches back and forth between tremolo death metal riffs and full on Discharge drive. "
- Last Rites
yourlastrites.com/2018/08/22/descent-towers-of-grandiosity-review/

"this is not a record to be enjoyed in any conventional sense of the word, but be to turned to when you want something that has real teeth, that sounds as hurt as you feel. Exhausting in the best possible way, Towers of Grandiosity is as vicious as they come, and highly recommended."
- The Sound Not the Word
thesoundnottheword.com/2018/08/17/review-descent-towers-of-grandiosity/

"Descent play extreme music. Extreme metal for the ears to be assaulted with. We’re talking no holding back heaviness. A mad mash up of death, hardcore, grind and much more. As the feedback laden Confined, the severity of Fountains of Sand and the soul-sucking rage of Pedestal of Scum lay it all out to be heard and enjoyed."
- Games, Brrraaains, and a Headbanging Life
gbhbl.com/album-review-descent-towers-of-grandiosity-redefining-darkness-records/

"Undoubtedly masters of their craft, Descent is proving that they are ready to place their name next to the heavy hitters of the death and grind scene. Towers of Grandiosity showcases the quintets’ undeniable musical talent. This is an album that is sure to capture the hearts of death and grind fans worldwide. "
- The Void Report
thevoidreport.com/2018/08/16/album-review-descents-towers-of-grandiosity/

"Skinwalker is the first single to be released from the album, this track is aggressive and relentless from start to finish. It is like a whirlwind of faultless hard hitting high energy vocals, guitars, bass and drums that combined make me weak at the knees from the sheer perfection that has been created by this super talented line up of musicians. You can hear strong influences from bands like Nails and Dismember on this track."
- Overdrive Magazine
overdrive-mag.com/2018/07/27/review-descent-towers-grandiosity/

"I would say this is one hell of a Death Metal album. With chunky tone from guitars and contant barrage of savage drumming, it's a punishing record but totally worth your time but to some might be too much to handle (seriously). It's fast, it's nasty and it's totally doesn't give a fuck to slow down. "
- Dissecting the Euphony
dissectingtheeuphony.blogspot.com/2018/08/descent-towers-of-grandiosity-full.html

Formed in 2014 with the desire to create a sound influenced by a plethora of styles falling under the umbrella of extreme and heavy music, Descent features members of From These Wounds, Scumguts, Dire Wolf, Coffin Birth, The Fevered, and Siberian Hellsounds.

With the release of their demo in 2015 the band earned numerous support slots opening for the likes of Mindsnare,King Parrot, Hierophant, Hexis, Colossus, Magrudergrind, Shackles, Tortured, Lo!, Cursed Earth, and Earthrot.

For fans of Dismember, Black Breath, and Nails, Descent draw inspiration from all of the above and many more on the death metal, grind, hardcore and punk spectrum, spewing forth an urgent, powerful blast of ferocity, speed, and heaviness intertwined with a raw melodic sensibility not unlike that pioneered during Sweden in the 90ʼs.

The band are gearing up for their first of a number of upcoming tours, this time around supporting Origin & the Crown in Japan.

Bandcamp Daily  your guide to the world of Bandcamp

Cannibal Corpse's George "Corpsegrinder" Fisher stops by for an interview